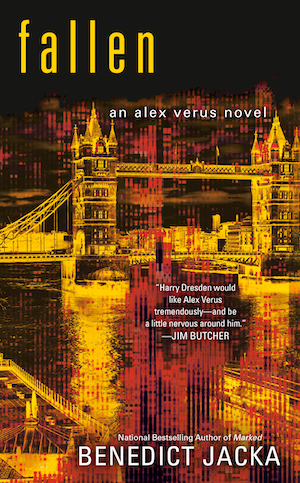 The tenth book in the Alex Verus series.

Once Alex Verus was a diviner trying to live quietly under the radar. Now he’s a member of the Light Council who’s found success, friends . . . and love. But it’s come with a price – the Council is investigating him, and if they find out the truth, he’ll lose everything.

Meanwhile, Alex’s old master, Richard Drakh, is waging a war against the Council, and he’s preparing a move that will bring Alex and the life mage, Anne, under his control. Caught between Richard and the Council, Alex’s time is running out. To protect those he cares for, Alex will have to become something different. Something darker. . .

The exciting 10th novel featuring British mage Alex Verus blows apart the series’ underpinnings and releases Alex’s power as well as his rage. Until now, Alex, a diviner who can see many possible futures, has tried to play it safe during the escalating war between the supposedly moral Light Council and scheming, enigmatic dark mage Richard Drakh, focusing on trying to protect his friends and especially his lover, Anne . . . Badly injured, Alex realizes that he must stop reacting to outside pressures. Rather than just seeing the future as it might be, he must start seizing the future he wants. Considering how much lore has accumulated in the series, this isn’t an ideal place to begin reading about Alex’s adventures, but returning readers will be satisfied by how the story keeps building momentum and excitement. This remains a superior urban fantasy series that’s worth any reader’s time.

You can read the first (and second) chapter of Fallen here.

Like the previous books in the Alex Verus series, Fallen is available in audio format.  You can find it at the publisher’s website.