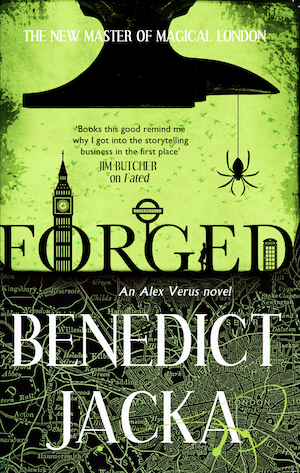 The eleventh book in the Alex Verus series.

To protect his friends, Mage Alex Verus has had to change – and embrace his dark side. But the life mage Anne has changed too, and made a bond with a dangerous power. She’s going after everyone she’s got a grudge against – and it’s a long list.

In the meantime, Alex has to deal with his arch-enemy, Levistus. The Council’s death squads are hunting Alex as well as Anne, and the only way for Alex to stop them is to end his long war with Levistus and the Council, by whatever means necessary. It will take everything Alex has to stay a step ahead of the Council and stop Anne from letting the world burn.

The 11th urban fantasy in Jacka’s superior Alex Verus series keeps the action at a boil. Alex used to be a relatively minor mage largely concerned with protecting his friends during the struggle between the supposedly moral mages of the Light Council and the mob led by dark mage Richard Drakh. But following the events of Fallen he’s become ruthless to save himself from his enemies and free his former lover Anne from the jinn that is working to lure her to the dark side. To keep ahead of his foes, Alex relies on the fateweaver, a potent magical artifact that threatens to take over his body should he use it too often. This outing is grittier than earlier installments, but Alex remains both smart and snarky as ever. Jacka has a gift for writing wild magical battles as simultaneously slapstick and pulse-pounding, as well as the discipline to shed characters and lore from previous volumes when they’re no longer necessary to the plot, keeping this long-running series feeling trim and accessible. While this won’t be the ideal starting point for the uninitiated, it admirably maintains the series’s relentless momentum. Series fans should snap this up.

You can read the first chapter of Forged here.

Like the previous books in the Alex Verus series, Forged is available in audio format.  You can find it at the publisher’s website.