Welcome to my online store!

One of the most common questions I’ve had over the past few years has been “are you going to write more Alex Verus novels?”  I’ve always said no, and that hasn’t changed:  as of 2021, I’m still intending Risen to be the last in the series.

But while I’m not planning on doing any more novels from Alex’s perspective, there are a lot of other characters from his world that I’d be interested in writing side stories for.  So I’ve decided to experiment.  I’ve written a short novella from Sonder’s perspective, and made it available for sale below as of today (June 18th, 2021).

I’m using this novella as a way of gauging interest.  Now that I’ve put it online, I’m going to leave it for six months or so and see what kind of reaction it gets.  If sales are good, I’ve got ideas for a half-dozen other short stories and novellas in the Alex Verus setting – I’ve drafted out a story featuring Variam and Landis, another involving Alex and Anne, and a third following some of Richard’s cabal.  I could write them all quite easily, and I was thinking of putting up a poll to see which other characters people are most interested in.  If I kept it up long enough, I could even turn the stories into a collected book down the line, with a paper and audio edition.

However, it’s entirely possible that most of my readers aren’t especially interested in Alex Verus side stories, especially ones that don’t star Alex himself.  In which case Favours is probably going to be the only one I write.  If so, that’s fine too – I’ll just focus on my new series instead.  We’ll just have to see!

Anyway, that’s enough from me!  Read on for a description of Favours, or click on the image or the button below to purchase it directly. 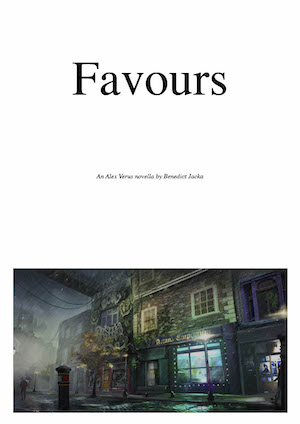 Favours is a novella set in the Alex Verus universe that takes place in between Alex Verus #6, Veiled, and Alex Verus #7, Burned, told from the perspective of the time mage Sonder.  Returning to London after his year-long assignment to Washington D.C., Sonder is called into Keeper HQ to work with Caldera on an investigation.  What looks at first like a simple burglary quickly turns into something much more difficult and dangerous, forcing Sonder to choose where his loyalties lie.

(Problems or errors?  Send me an email at Contact.)