Beginning apprentices and other newcomers to the magical world tend to have two big questions about magic.  The first is the why – what it is, where it comes from, and why some people can use it when others can’t.  The second is the how – what works and what doesn’t, and what you can expect when dealing with a mage.

The first question is harder but also much shorter to answer, so we’ll deal with it first.

The traditional answer is that magic is connection.  A mage is a person who has an attunement to one particular aspect of the world around them: they perceive that aspect more clearly and directly than other people and over time they can learn to control it.  The aspect can be something elemental like air or heat, something connected to living beings like life or thought, or an abstract concept such as chance or time.

The type of magic a mage is connected to is based on their inner nature – their personality, character, and soul.  You could say that someone’s magic is an expression of their inner self, but it’s just as true to say that someone’s magic is their inner self – certainly mages can’t survive without their magic and in the rare cases where it’s separated from them they don’t live long.  The mage’s nature determines the kind of magic they can use, not vice versa – there’s no way to use fire magic without having the personality of a fire mage.  This doesn’t mean that mages of a certain type are all the same, but the type of magic that someone can use always reflects a profound truth about the kind of person they are.

The best way to think of the magic types is as a spectrum, like this: 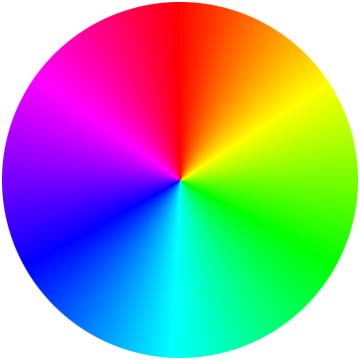 Mages are a little circle on the spectrum.  They have access to all the ways of using magic within that circle.  That circle might overlap with the circles of other mages, in which case they can use some of the same spells, but usually the circles don’t overlap at all.  Some mages have slightly wider circles, some have slightly narrower ones, but one thing that’s always the same is that a mage’s circle is always very, very small compared to how big the whole spectrum is.  Even the most multitalented mage can never learn to use more than the tiniest fraction of all the spells out there.

Here are a few of the most common questions that new apprentices usually ask.

Q. Can I learn to use a different kind of magic?

A. Yes, you just have to change your entire personality.

Q. Which type of magic is the strongest?

A. Which tool in a toolbox is the best?

Q. Are any of the magic types inherently evil?

A. No. Some are inherently dangerous and make it very easy to do unpleasant things to people, but there are good and bad mages of every type.

Q. Is it possible to have ‘hybrid’ mages who are a mix of two types?

This entry was posted in Encyclopaedia Arcana. Bookmark the permalink.