(This is part 5 of a 12-part series of author commentaries on the Alex Verus books.  The master post with links to all the parts is here.)

Hidden was the big planning book of the Alex Verus series.

My starting idea for Hidden was simple:  do something with Anne’s past.  I wanted to develop the story of Richard’s return, too, but Hidden was mostly about Anne, just as Chosen had been mostly about Alex.  I’d been dropping hints as to Anne’s past in Taken and Chosen, and I thought that this was the right time to reveal exactly what that past was.

Yeah, it wasn’t.  Hidden turned out to be an enormous struggle to write.  Counting the first draft, the edits, and the rewrites, finishing Hidden took something like a full year, longer than any book in the series besides Fated.  There were several reasons for this, and the biggest one was that Hidden was the book in which I had to figure out the direction in which the entire Alex Verus series would go.

Chosen had established that Richard was going to be the big antagonist of the series.  But how was that going to play out?  I didn’t know what Richard wanted or what his plans were, and as a result, in the first draft of Hidden, Richard’s presence was very muted – it’s hard to write a character when you don’t know why they’re there.  Anne’s character was also much vaguer and less clearly defined.  Her dark side was there, but it didn’t show up until later and it was less “dark” and more “ambivalent”.  In both cases, I wasn’t sure where I wanted to go with the characters, and so I avoided committing them to anything.

My editors thought this was a terrible idea.  As they saw it, readers were going to have high expectations for Richard, especially after how I’d ended Chosen, and that having him act like this would be a massive anticlimax.  Anne got even harsher feedback – my editors thought she was unlikeable, uninteresting, and a stick-in-the-mud.

So I went back to the drawing board, which brought me right back to the question I’d been avoiding.  Where was the series going?

And somewhere along the way, I came up with an answer.  I’d tie the two together.  Richard’s ultimate plan would involve Anne, and Anne’s future would be shaped by Richard.  The details of that plan would take another two or three years to work out, but the core shape of the story was set in 2013 and never really changed.  Interestingly, the initial spark of the idea came from something I’d read.  Richard’s intentions towards Anne, and the way the story plays out, is (very loosely) based off the events of a fairly popular piece of media.  As far as I know, no-one has guessed what it was, although a couple of people on obscure corners of the Internet have noticed the similarity in theme between it and Alex Verus.  I won’t give it away because I think it’s more interesting as a mystery, but I’ll be curious to see if people can figure it out after the publication of Risen.

Figuring out Richard’s plan made things fall into place.  I rewrote his scene, and this time it went much more smoothly.  Anne was more difficult.  I improved her character in the rewrite of Hidden, but no matter how long I wrote her, I was never able to get as comfortable with her personality as I was with Luna’s.  Reader reactions have tended to reflect that, too – Anne consistently gets rated as one of the less popular characters in the series, below Alex, Luna, Arachne, Cinder, Landis, Starbreeze, and Hermes.  Something about her personality just never completely clicked, and I’ve never been able to quite fix it.  Maybe it was that her initial character concept was just so weird that was hard for people to really empathise with her.  Maybe I made some mistake when originally designing her that made it hard for her to become a fully three-dimensional person in her own right.  Or maybe it’s something much simpler – it’s just really difficult to write a genuinely good character (as opposed to a decent or okay character) of the opposite sex.  I find most male characters written by female authors to be fairly unsatisfying, so expecting to consistently write good female characters myself is probably asking a lot.  Still, I’ll keep trying.

Hidden also dealt with the fallout from what had happened in the previous book.  The events of Chosen had split Anne and Sonder from Alex’s group, but while Alex was able to repair his relationship with Anne, Sonder was another story.  I was slightly surprised at how much negative feedback Sonder got as a result – my readers definitely took Alex’s side, and even the ones who still liked Sonder were hoping that he and Alex would become allies again, rather than seeing them as being on fundamentally different paths.  (Anne also got a lot of criticism, but I think finding out her backstory in Hidden made people a bit more willing to sympathise with her.)  The focus on these interactions made Hidden a more character-oriented book than Chosen.

As part of this, Hidden introduced Alex’s father.  I think a lot of readers wondered at the time how he was supposed to fit into the larger storyline.  Assuming that you’ve already read most if not all of the books, you’ll know the answer to that:  he doesn’t.  Alex’s father has nothing to do with the overarching plot of the Alex Verus series, and he’s in Hidden purely to show how Alex turned out the way he did.  Judging from some of the reactions I got, I think this is probably a bit unusual in this kind of novel, but I thought the insight it gave into Alex’s character and family history was worth the page space.  Alex’s father has never appeared again – his relationship with Alex is pretty much stuck, so there’s no point.

Being a more character-focused book had its drawbacks.  Hidden was published in 2014 to only moderately favourable reactions – its overall ratings were still higher than books #1-3, but they were lower than Chosen’s, and the tone of the reviews was definitely a bit less enthusiastic.  It wasn’t hard to see why.  Chosen had been a “payoff” book with a lot of high drama and excitement, while Hidden was slower and more focused on setting up future developments.  On the positive side, Hidden aged well.  Its ratings would continue to climb over the years, while Chosen’s would go slightly down.  I think readers came to appreciate the character development over time.

And finally, Hidden brought in Hermes, one of the series favourites.  As a few people guessed at the time, Hermes was a fox version of a fantasy creature from Dungeons and Dragons called a blink dog.  When I wrote the book in 2013, it was a new name, but in 2018, another company called Blizzard created a card called “Blink Fox” for their online game, Hearthstone.  So now if you Google “blink fox” you’ll get a hundred variations of the image below, which isn’t what Hermes looks like at all (he’s supposed to look like a European red fox).  Oh well! 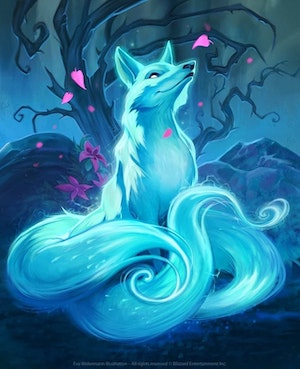 This entry was posted in Author Commentary. Bookmark the permalink.